You are here: Home / Archives for Family

Dan Farr, 1927-2019, was (and always will be) my dad, my teacher, my mentor, my advisor, my guide, my example, my coach, and the man most responsible for discipling me. He was a man of highest Christian character, devotion to his Savior and to my mom and family. He was generous, and self-sacrificial. He always treated everyone he met as his equal, worthy of respect, an eternal being made in the image of God deserving to hear and know the Way to eternal life. My brother, sister and I are so blessed to have Dan Farr as our earthly father who always lived in a way that pointed to our Heavenly Father. Here are a few of the life-lessons he taught us to live by. I wish I could say that I have been as successful as he taught me.

END_OF_DOCUMENT_TOKEN_TO_BE_REPLACED

We celebrate Thanksgiving as a special day set aside for giving thanks to God for His wonderful blessings. Most of us have longstanding traditions around Thanksgiving. Many of us will travel to be with family and others will host family members traveling to spend time with us. For most, Thanksgiving is a festive and happy time. For some, the holiday is a reminder of loneliness and emptiness, filled with sadness instead of joy.

Let’s take an honest look at how we actually spend the day. While we call it Thanksgiving, do we really spend the day in an attitude of thanks, meditating on the provisions from God that He freely gives us? Other than the typical extended prayer of thanks offered around the dinner table, I wonder just how much more devotion we give to giving thanks.

END_OF_DOCUMENT_TOKEN_TO_BE_REPLACED

How many times have you tried to have some kind of family devotion or Bible time? It is so hard to be consistent, and many parents give up. You are not alone in your struggle, and I want to offer a few suggestions to help.

When you try to find that perfect time to have your family devotion, Bible reading or worship time, you will come across obstacles.

END_OF_DOCUMENT_TOKEN_TO_BE_REPLACED

Today, we celebrate Independence Day, July 4, 1776, the day the American Colonies declared independence from the British Crown. The first battles of the American Revolutionary War had already taken place more than a year before on April 19, 1775, the Battles of Lexington and Concord in Massachusetts, and the war raged on until September 3, 1783. While all these things seem so far removed in history and location, I remember my ancestors who  lived just several generations before me, and who fought to obtain American Independence: END_OF_DOCUMENT_TOKEN_TO_BE_REPLACED

Tonight,  we were blessed to have stood on the sand as we listened to the waters of the Atlantic, coming and going in rhythm. The ocean has been doing this for thousands of years, but tonight was different. Tonight, Friday, July 4, 2014, we were watching the amazing fireworks displays as far north and south as we could see — up and down the beach. This was, by far, the most incredible barrage of fireworks we have ever witnessed. The explosions persisted non-stop for nearly an hour, many triggered by individuals, but one quite impressive show at the south end of the beach. Thousands had gathered all along the beach to celebrate the day our nation’s Founding Fathers declared that the thirteen colonies were independent states.  While we celebrate July 4 as the birthday of these United States, the battle for life had just begun with that Declaration.

Americans have celebrated July 4, 1776, as the birthday of the nation, but the United States only became free from English rule in April of 1783, after nearly eight years of fighting (The American Revolutionary War actually began in April of 1775). During those war years, many patriots gave their lives for the cause of freedom. They died to give us the freedom to govern ourselves. They died to give us reason to celebrate and shoot fireworks. Had these men chosen not to fight and not to be willing to die for the greater cause of liberty, we would not enjoy the freedoms we too frequently take for granted. These patriots sacrificed much for a cause greater than themselves.

As we stood on the beach in awe, we felt an enormous sense of pride. We Americans are so blessed. God has given this nation an abundance of His riches, blessings and grace. We are proud Americans. We are also blessed Christ-followers. We are reminded that God Himself made the ultimate sacrifice when He gave His Son, Jesus Christ, who died for us so that we can enjoy the highest freedom — freedom from enslavement and bondage that sin holds over us. If God had not been willing for Jesus to die for us, we would never know Him, His grace, nor His forgiveness. We would still be held in slavery and bondage by our sin.

I thought about these things as the skies lit up with one explosion after another. I am a proud and patriotic American. I love Independence Day. I am a blessed disciple of Jesus Christ. I celebrate His victory over sin and death, and the freedom He gives. 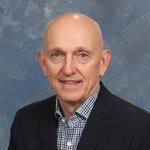 Christ-follower, husband, father, grandfather. My life purpose is to glorify God by making disciples who make disciples, and to train & equip Bible teachers. I am on staff at First Baptist Church in LaGrange, Georgia, where I serve as Discipleship & Christian Education Pastor.

I enjoy bicycling, genealogy, photography, and I make delicious divinity and other candies! I am a cancer survivor and a mentor to men who need encouragement during their fight against cancer.